Be a part of the solid waste solution in Rutherford County 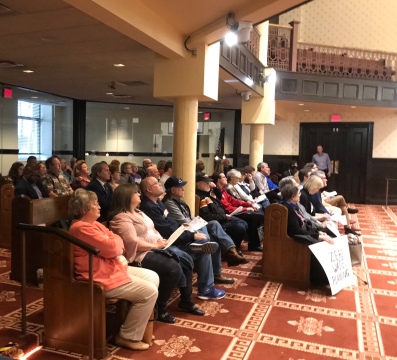 From a news release:

On February 27, the Rutherford County Solid Waste Advisory/Steering Council (SWAC) recommended to the local governments in Rutherford County that a solid waste authority be formed to determine, plan for, and implement the best way to handle garbage, trash, and recyclables in the future. Informally, the SWAC wants recycling and waste reduction to be an important part of the mission for the authority.

An authority would be established based on requirements outlined in the Tennessee Solid Waste Authority Act of 1991. The authority would be governed by a board of appointees, and the professional staff would provide leadership for managing waste and recyclables in the member communities. It would most likely include at least the County and Murfreesboro, and any of the other towns and cities in the county could also join, including Smyrna, La Vergne and Eagleville.

“With the current system approaching capacity, this authority will give us a sound way to manage solid waste for years to come,” said Murfreesboro Mayor Shane McFarland.

Rutherford County Mayor Ernest Burgess added, “County residents expect us to make smart decisions with their tax dollars, and this approach gives us the best chance to do that.”

The motion for the SWAC to endorse a solid waste authority was made by Lynnisse Roehrich-Patrick, SWAC member and former Executive Director of the Tennessee Advisory Commission on Intergovernmental Relations (TACIR). Ms. Roehrich-Patrick included in her motion the reasoning that an authority would let knowledgeable professionals who are removed from politics make the best decisions for the County as a whole.

Kate Vasquez, Senior Consultant at Gershman, Brickner & Bratton, Inc. , advisor to the planning, presented the technical benefits and challenges associated with an authority. A notable benefit is that an authority is an enterprise, with its own revenues, expenditures, and debt that do not impact the finances of the member governments. While start-up funding would come from the member governments, the authority should become financially independent within one or two years.

Following discussion regarding organizational options, the SWAC discussed possible operational options. The current disposal solution for the entire county, the Middle Point Landfill owned and operated by Republic Services, Inc., is projected to close in about ten years. One of the options that was discussed by the SWAC involves an engineering plan to relocate waste buried at the Rutherford County Landfill, located next door to Republic Services’ Middle Point Landfill, and combine the properties so as to extend the life of Middle Point approximately 15 additional years. The discussion by the SWAC members identified the consideration and possible negotiation of this option as a good example of work an authority might handle.

In order to keep momentum going, the SWAC resolved to recommend that Rutherford County allow Republic Services to conduct initial site investigations at the Rutherford County Landfill regarding the engineering project. The motion to do so was made by SWAC member Merry Hickerson, Rutherford County Highway Department Coordinator. She noted that information is valuable, saying, “More research doesn’t mean it’s a done deal, but it will help with the discussions going forward.”

The Rutherford County SWAC is a group of 14 citizens and elected officials from across the County asked to review the solid waste situation and make recommendations to the governments of Rutherford County. The workshop on February 27, 2018, was their third and final scheduled meeting. The primary output of the SWAC is a development plan documenting their activity and the recommendations of the consultants. The draft development plan was circulated in advance of the February 27 meeting, and the final version is available at http://www.renewalrutherford.com.

One thought on “Who will make solid waste decisions? Advisory council hears recommendations”

45% – Amount of increase in solid waste during the past 15 years.

No later than 2028. That's when the Middle Point Landfill will reach full capacity. It's going to cost. We need a plan. We need your input. It's your future.

Renewal Rutherford is here to keep you informed and give you a say in the process. Read more here, and give us your thoughts. Or go to Join the Conversation on this page. Or email: RenewalRutherford
@gmail.com

Solid waste disposal is important for the Rutherford County economy. Businesses that are looking for a place to invest and bring jobs want an affordable, accessible way to dispose of solid waste.

Growth has its costs

Murfreesboro residents have not seen a tax increase in 18 years. But as the population grows, so does the need for services, including police and fire protection – and solid waste disposal. Increased need means increased costs.
%d bloggers like this: